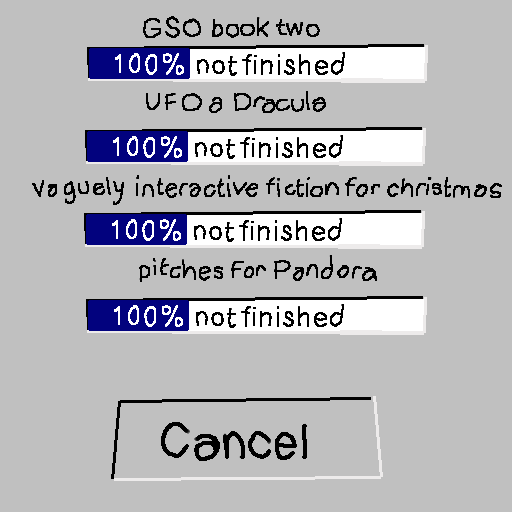 Here is a handy chart of projects that are 100% not finished. I guess I might be able to use the same graphic next month too. I've written some words too but perhaps the image is enough.

This month I have been helping someone with a project they were working on. I don't know that I was that much help but it did end up occupying my thoughts and hours for a good couple of weeks. I will share it with you when the time comes.

I've been working on a few ideas for pitches for a new anthology comic called Pandora. they list Misty as a point of reference. here's a link to the call out.

I don't know that I'm the right person to be contributing to this. Get in touch with them if you are. But I think the style they are aiming for is so close to the sort of thing I make with spooky weirdness and folklore that I cant help myself. And I've already come up with a bunch of stories that wouldn't exist otherwise. And I will just put them out myself if they're not needed.

As well as returning to work on GSO with the scanning of completed line artwork for pages of book two. I've started work on colouring artwork for non spectrum versions of my vaguely interactive fiction for Christmas. It turns out the spectrum version isn't as finished as I thought it was and needs another pass. The difficulties I've had with multi loading chapters on ZX spectrum have thrown a bit of spanner in the idea of me returning to UFO a Dracula to complete that. My experiments with comics over the last year are making me lean back towards them as an efficient way of making stuff. So maybe I could do a comic version of UFO a Dracula at some point as most of it is written. I really thought the last year had finished me off. It's all still fumes at moment for me.